What is Tui Na?

Tui Na which means to "push and grasp" is a medical treatment related to acupuncture and is a division of Traditional Chinese Medicine (TCM). It ranks equally with acupuncture, herbal medicine and Qigong.

It has been tried and tested for over 4,000 years. TCM is regularly used by over one fifth of the World's population and is the second largest medical system in the World, functioning in China with equal status alongside Western style medicine.

There are two levels of Tui Na Massage on offer:

What is an Tui Na Practitioner?

A fully qualified Tui Na practitioner is able to give a specialist Traditional Chinese Medical diagnosis and prescribe treatments that can be effectively used for a wide range musculo-skeletal conditions as well as other health issues.

Set to explode onto the centre stage of complementary medicine, Tui Na:

Tui Na is the most powerful tool for focussing deep pressure with diverse movement along the energy channels and into their Qi-points.

Tui Na is sometimes called "Chinese Massage" and together with Acupuncture and Herbal therapies, is part of Traditional Chinese Medicine. It is much more than massage and many of the techniques used are powerfully manipulative.

The healing power of Tui Na is based on balancing intrinsic energy by working with many different techniques on the energy meridians and acupoints. It controls pain.

Tui Na dates back over 5,000 years making it one of the oldest hands-on systems of therapy in the world and recorded over 2,300 years ago in the Yellow Emporor's Classics of Internal Medicine. It is one of the three main branches of Traditional Chinese Medicine together with acupuncture and herbs.

It is a complete healing system based on the underlying principles of energy balance and flow through the system of energy channels called meridians.

The government of the Peoples' Republic of China provide hospitals of Traditional Medicine in every city, town and village in the country and consider it as having the same status as Western Medicine. Tui Na is available everywhere and one fifth of the world's population can make recourse to it for maintenance of health and control of chronic pain. 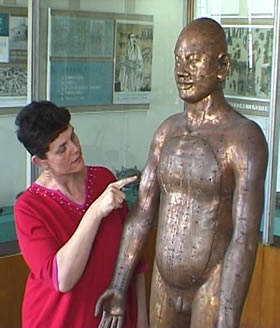 2,300 years ago the Chinese had documented and mapped a series of fourteen meridians and the exact positions of over 300 acupoints along them.

They embossed them onto life size bronze figures which are still in existence today (right).

The meridians are considered to be the control centres for transportation and distribution of energy which they call Qi.

Each meridian is associated with a major organ. Each organ has a powerful effect on a particular emotion and one of the senses eg the Spleen can relieve worry and affects the mouth, the Liver controls anger and can clear the eyes etc. In this way Tui na treats the body, mind and emotions.

Tui Na has many different techniques for massaging along the course of the meridians and for applying pressure with movement to the acupoints. In this way energy blockages are effectively removed and the yin/yang balance restored.

Acupressure is one of the components of Tui Na which focuses only on the acu-points. They can help control pain and maintain health.

Acupressure originated by man pressing painful areas on the body to relieve pain. Through experience man discovered which points gave good results. Acupressure seeks to produce the same results as acupuncture by using deep static pressure on the acupoints instead of needles.

It is practised throughout Asia and is particularly popular in China, Japan, Korea, Tibet Thailand and India. It has been deeply embedded in Eastern folk medicine for many thousands of years and used as a treatment within the family home The wisdom being passed down from generation to generation.

About 2,300 years ago, a systematised and intelligent approach to pressure points was developed by the Chinese and the instinct of touch became a skill. These healing skills were based on putting pressure on specific energy points to harmonise total body energy. Knowledge of pressure points gradually spread through.

"After about 90 minutes of this muscular steam-rolling you walk out feeling three inches taller and as supple, relaxed and stress free as a five year old."