What is Tai Qi?

Tai Chi is an ancient Internal Chinese Martial Art and fitness regime which focuses on slow, flowing movements and natural breathing techniques. Some say this can be called &quotemoving meditation&quote

The slow movements can be performated by both the young and old and for some can be a journey of physical, mental emotional and spiritual improvement. The key to Tai Chi is patience in practice.

Tai Chi Chuan is the full name and can be translated into English in different ways, the common translation for "Tai chi " being "supreme ultimate" and "chuan" meaning "fist"

Tai Chi is usually practised as an exercise in slow, precise movements. Techniques of Tai Chi can also be adapted to be performed sitting down in a chair. Though being a Martial Art, Tai Chi can also be used as a combative art and effectively enhance Kung Fu, the umbrella term used for Chinese Martial Arts. Just like Kung Fu, there are hundreds of different Tai Chi styles that have been passed down through the years within families and over generations. Where Tai Chi is an Internal Martial Art focusing on manipulating Chi, Kung Fu would be classed as an External and/or Hard Martial Art focusing on explosive punching and kicking.

What is Qi Gong?

The meaning of Qi Gong is literally "Energy Work" and can be thought of as movements for a certain situation, whereas, Tai Chi is a set of movements. Whereas Tai Chi is a moving meditation, Qi Gong can be known as "standing meditation", though there are a number of moving and seated sets as well.

Qi Gong is the act of harnessing the practitioners willpower and focusing their energy through their palms. Focusing the mind and breathing is also instrinsic for the moving practices, when performing the more passive non-moving exercises the practitioner focuses the mind inwards. 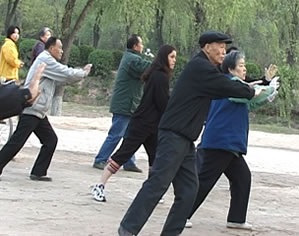 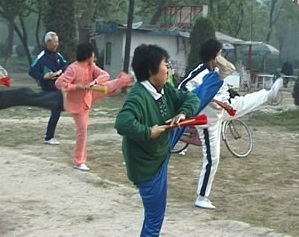